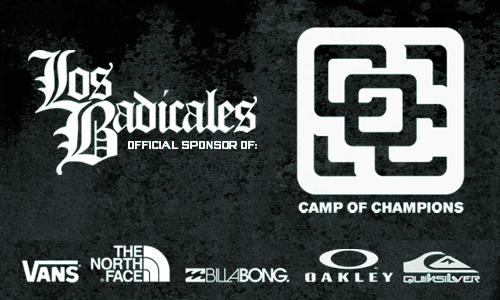 Los Badicales is now sponsoring THE premier snowboarding summer camp, the Camp of Champions located on Whistler Blackcomb mountain in BC, Canada.

As a major sponsor of the camp, Los Badicales joins the ranks of other snow sport players like Burton, Oakley, Billabong, DC, Quiksilver, among others.

The camp’s coaches are olympic and X-Games athletes raising up the next generation of shredders on the best park and half pipe on the North American continent.

Los Badicales means being Badder than Rad and Radder than Bad.We are a crew, a team, the most Badical group of snowboards on the planet. We are “The Badical Ones”

Welcome all those who are Badical and those seeking Badical status!